With each release I feel we get closer and closer to the initial goal of creating a streamlined workflow for hard surface use. This release brings us a little bit closer while also providing a new ui and plenty of new things to enjoy.

First and foremost shout out to the team.

I am proud to announce the release of HardOps 985: Neodymium… X. 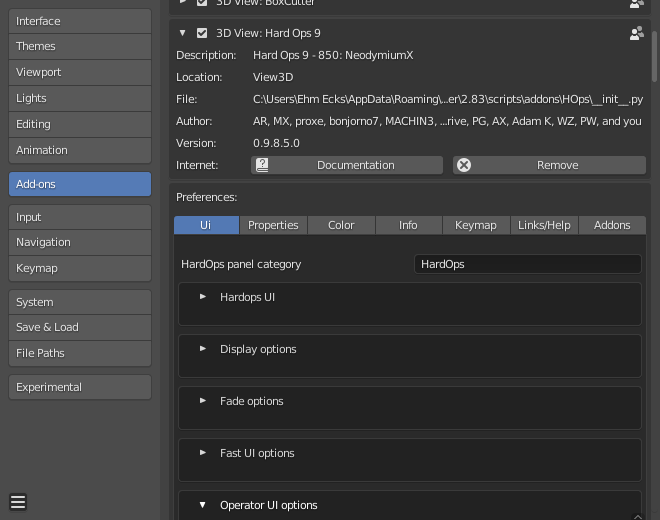 In addition to being cleaned up a bit there is now a panel category area. Deleting the entry removes the tab from the N panel.

Over the course of this development we came to realize our typical approach was what could be considered “fast” and a new UI system was made by ST3 to keep up with us. Alternative to this is the expanded UI which I will get into next.

Color customization was big for me because I wanted my UI pink.

This system extends to most tools and modals.

Even operators display a ui similar to our first attempts. This was crucial to me. Having this information really helped ground the experience and maintain awareness.

And of course if you don’t like pink you can choose something more “fitting”.

After a boolean F9 will bring up a panel where parent can be checked for booleans.

This can also be set by default in prefs. 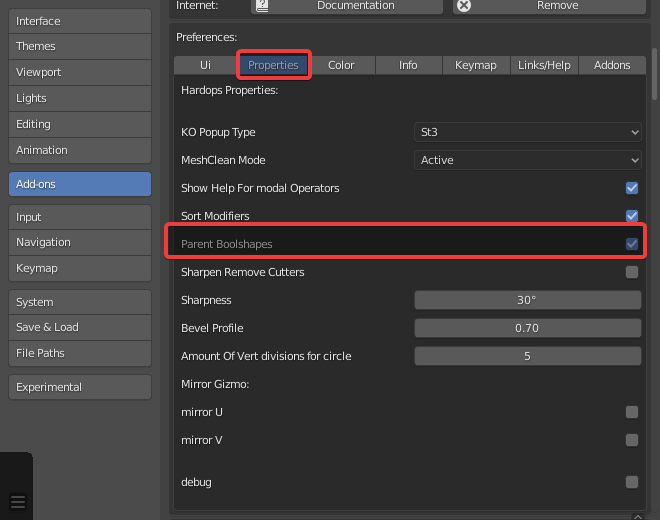 Csharp within sharpen has been expanded to be able to remove cutters when used. This is also able to be set in preferences as above.

If a curve is selected and a mesh shift clicking knife will perform knife project in a way that utilizes curve now. Someday it will be even more automatic but for now this is a step in the right direction.

C0 was diligent in his work with fixing circle and now it is performing better than last release. I still have hopes of rewriting and revamping it but now it survives once more.

Smart apply was intended to be a smarter version of the apply system of Csharpen. In this release it has been expanded further to encompass more.

Shift clicking smart apply will create a new duplicate with weighted normal and the last bevel removed to assist with quick work.

Dice is now more capable than ever. Last release we added “big dice” where users can dice multiple objects using the same die. This time we allow for a bevy of new things:

to_dice – allow dicing of a primary object using the bounds of the secondary object.

A prop was added to the ctrl + ~ HardOps helper for choosing how to treat dice prior to use. When mods were present the dice would never go through so smart apply is here to help make sure dice works as desired. Without applying the last level of bevel or weighted normal. 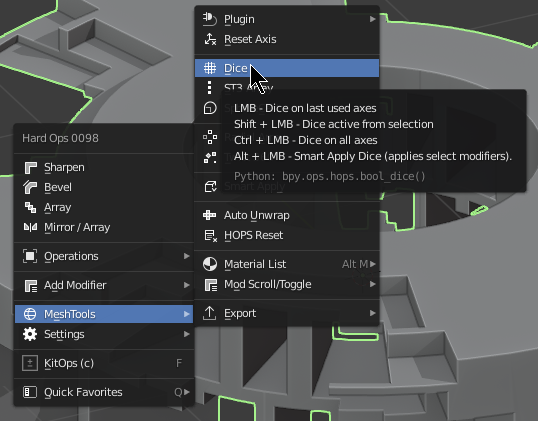 Alt click will also do it unless emulate 3 button is enabled then no alt. .

When sort bypassing users may now choose to add and adjust a bevel at that intermediate stage.

Curve extract will take a surface and either make it a curve or an extraction. Extractions without mods are also capable from this.

First we had to_box then to_plane then I didn’t want to add more of these. So now introducing to_shape. Now you can turn an area into a shape box, cube or cylinder.

Kitops has also received an update from within hops. If used with the Q menu option kitops will now have a floating, scalable and movable popup.

Shift + clicking the option will make it stay allowing for quick changing.

There’s quite a bit for hops I am sure is being missed in this log but I wanted to go over the most crucial. The UI system extends far beyond what was shown. As time goes on we hope to show a different way to approach things and further make systems optimized for users requiring simplicity.