Every release is an adventure. This one was no exception. I am proud to announce the release of Boxcutter 715: Utility Knife

This release was a doozy. Things were being perfected even unto the final minute but this update has been in the works since the last time we met. With this update we wanted to tackle the number one request ever.

This time we come back with a grid. The grid people wanted. So without further ado lets jump into it.

Proxe has once again outdone himself on this release. The released version of grid is the 3rd iteration with the first 2 not being adequate enough for release. AR also remains integral and made the initial prototype.

This grid is infinite. Users can press ctrl during boxcutter to grab a face vector and go to work. There is even a fade and color change system to make it visually pleasing.

The previous system utilizing dots would only go so far.

Thanks to this drawing with precision is faster and more capable than ever.

The new grid system will be taking over all alignment systems in the future going forward as it is further refined. Our initial release isn’t perfect but serves as a demo of what we are aiming to go for. As with as systems as it gets perfected it will be right at home and an integral part of the boxcutter workflow.

Surface align is a work in progress. When object is active the grid will attempt to orient to the surface for snapping via the grid. In the event of directional inaccuracy simply drawing without grid is more optimal.

View align uses the classic systems from previous releases. Grid has not been integrated yet but will in the future. View align works in perspective and orthographic.

I am excited to say cursor has been improved dramatically. In this update the cursor can be used for grid positioning and orientation however I hope to create support tools for assisting with getting the perfect cursor alignment.

When it comes to using grid with cursor. Aligning the 3d cursor to an edge can be useful.

Then use cursor as alignment. This can come in handy for hard to reach areas.

Last but not least the fallback of fallbacks received the same updates. Now with grid the world is better positioned for level design and make box work.

Having a grid that is infinite means that a larger grid size is not needed due to the grid generating as you move. However adding more units than 10 can result in some heavy performance and is not recommended for slower PCs.

Some of the lower configs look quite interesting.

2 gives us an idea for a future tool. And 0 is no grid at all and can be interesting to use as well. We may add a preset panel in a future release.

Grid is typically grey but in the examples I have grid color checked which makes the grid the same color as the cutter in use. This should be more useful for helping visually know what is about to happen.

This can be turned off under display in the behavior panel. 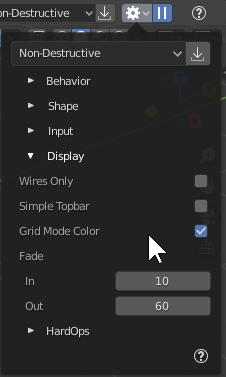 The whole focus of this release was grid and we hope users enjoy it. I received requests for it in every language and more times than anything else. We hope to expand on this in the future and maybe do a whole release catered towards precision working. So as always we welcome any ideas you throw out there. Along with requests, complains and support issues. I am truly grateful to all who have supported us and we endeavor to continue to provide a AAA experience.

But this isn’t over yet.

Sort was one of the first big changes we attempted in 2.8 and with this release I am proud to announce sort V2. This time latest sort behavior extends to all sorted modifiers and is even on by default!

The new sort should only sort the final iteration of a modifier solving many of the holdups that would come with non destructive cutting.

A rough overview on sort.

The sub-buttons are about “last sort”. Enabling one will ensure we only sort the last version of the modifier in the modifier stack. This keeps things fluid when working right.

Bevel is the main sort focus. And mirror.

When bevel is enabled there are options for ignoring only v-group bevels and  vertex bevels. This is because these mods have been deemed to never be worth moving around in the stack and must be omitted. The goal of sort is to be streamlined and allow for consistent working without interruption.

The drop-down on the end is for determining final sort or single instance sort. For example when working on a non destructive model with multiple bevels and mirrors, users now are able to choose which mods only sort on the last iteration. This ensures the above stack remains solid and unchanged.

Sorting options should only be on relative to your project.

Having them all on by default will cause serious workflow issues with mods being shifted in an unwanted manor. Even something like solidify is best used sparingly deepening on the result.

Read the tooltips to understand more about sort. In fact a little basic testing will show what we are going for with it.

Sort V3 will be coming to hardOps / kitops at a later time.

Keep modifiers determines what modifiers are kept live on cutters. This is below sort in the modifier panel.

If keep spin is on. Circle cutters remain non-destructive.

In conjunction with depth and snapping quick execute can be used to quickly block things out with precision.

At the top of boxcutter is the apply button.

When applying booleans the associated cutters are also now deleted.

In destructive mode cutters will no longer be created.

If you select a cutter and click apply only that one will be applied on the main mesh and cutter deleted.

This one is strange to explain but in short we deal with errors differently now. This should result in a more stable experience and less issues with dots being stuck on screen or grid overlap.

Also this resolves the issue with blue box in local mode. We hope. However local can be quite unusual at this time.

With any big systems change we expect bugs and issues. In the event you are having install issues contact us.

Welcome to all new users who get in on this Black Friday / Cyber Monday event. I hope to do an updated boxcutter crash course in the near future. Before that, I have to update the docs. 715 is intended to be an extended release meaning that much of the content planned for this term will have to be dropped in stages. But I am excited for what comes next.

Grid opens so many more possibilities than just a grid.

Proxeis a legend. He was working on this until the final ad on this page. I work for him. Since joining us he continues to keep us moving without stopping. AR has been a part since the beginning and without him there is no HOPScutter. I am honored by the chance to team with such brilliance and doubly honored by the work operatives continue to put out! I am the weakest link of the chain but I am held up by those who has helped me. In our community we hope to help others find their way as well. Thank you all for your support.

#hopscutter Ultimate Bundle is on sale for Thanksgiving / Black Friday! The next major release is on the horizon! #hardops #boxcutter #b3d #71Vhttps://t.co/aEMMZ5TUdQhttps://t.co/w6fRZJBd8i pic.twitter.com/eUt8OuzHqS

One winner of a free copy every 50 retweets !
you just have to retweet this post ! #b3d #blender #gamedev #archviz #BlackFriday2019 #3d #vfx #python pic.twitter.com/52P4zKhMwe